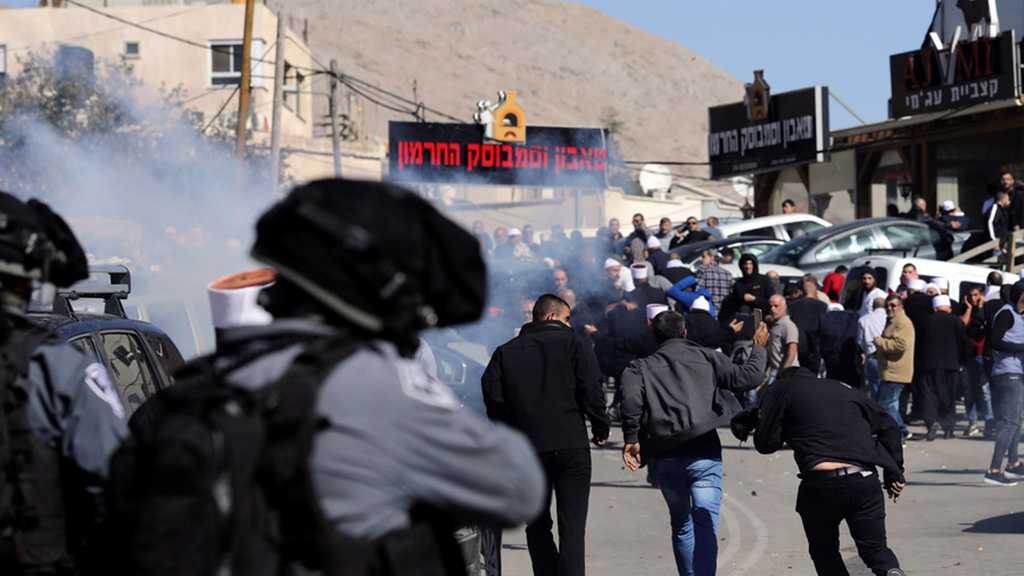 Golan Resists Judization: No for “Israel”

Syria condemned the “illegal elections” being held by “Israel” for the first time in the occupied Golan Heights, as an attempt to assimilate the Druze minority, who for their part have largely refused to take part in the polls.

Members of the Druze community residing under “Israeli” occupation for over half a century took to the streets on Tuesday in an effort to interfere in the municipal elections that Tel Aviv had introduced for the first time in the Golan Heights.

Carrying Syrian and Druze rainbow flags, hundreds of members of the Muslim minority sect assembled outside the gates of polling stations, trying to prevent other Druze community members from voting.

“The Golan’s identity is Arab and Syrian,” they chanted. Amid sporadic clashes with police, religious elders wearing their distinctive white caps, symbolizing religious piety, urged the youth not to confront the…

Member of the PLO Executive Committee, and the DFLP’s Political Bureau, Tayseer Khaled in a statement on Wednesday saluted the Palestinian Jerusalemites, as they have boycotted the municipal elections in the occupied East Jerusalem, which he said emphasizes their solid position on the city despite all the maneuvers exerted by the Israel Government and the occupation Municipality in Jerusalem headed by Nir Barakt over the last months to break the boycott campaigns led by the PLO and other political, national and social organizations as well as the Islamic and Christian figures.

Electors didn’t appear at the polling centers, and the electoral map showed that the percent of voting was drawing to zero as was the case over the last years.

Khaled added that boycotting of the Israeli Municipal Elections Is a clear message to the American Administration, and the Israeli government on the Palestinians rejection of Trump’s…

Earlier today the world lost a distinguished insightful mind and I lost one of my best friends. Enzo Apicella, the greater than life, tireless cartoonist passed away in Rome this morning.

Many of my followers had a lot of fun with our A to Zion – The Definitive Israeli Lexicon. The book of alphabetic satire was Enzo’s idea. Enzo saw in me an aphorism artist–that I could get at the truth with few words. He set me to work on a collection of hard-hitting definitions and he produced the relevant cartoons. As always, Enzo illustrated the truths that can’t be reduced into words.

I met Enzo in 2011 and we stayed in close touch since then. Despite his age, Enzo was the liveliest person around. He knew how to enjoy life — wine, food, garlic and women were his existential mantra.  And Enzo delivered…

US President Donald Trump walks to Air Force One prior to departure from Joint Base Andrews in Maryland, October 30, 2018, as they travel to Pittsburgh, Pennsylvania, following the shooting at the Tree of Life Synagogue. (Photo by AFP)

A group of Jewish leaders have blasted US President Donald Trump’s visit to Pennsylvania, saying the American head of state has blood on his hands following Saturday’s mass shooting at a Pittsburgh synagogue.

In a letter signed by 76,000 people on Tuesday, a group of progressive Jewish leaders – known as members of the Pittsburgh affiliate of Bend the Arc: A Jewish Partnership for Justice – told Trump that he was not welcome in Pittsburgh until he renounced white nationalism.

«We know that we are representing tens of thousands of Jewish people who have already signed, and people across the US, around the world, who feel that…

Gun violence in America happens with disturbing regularity – Jews targeted like Saturday in Pittsburgh an aberration, not a sign of worrisome anti-Semitism.

Criticizing Zionism and Israel is unrelated to anti-Semitism and hate-mongering. One thing has nothing to do with the other.

Anti-Semitism reflects hostility or discrimination against Judaism as a religion. Israel is a nation-state.

Criticizing its persecution of Palestinians, its wars of aggression, its terror-bombing of Syrian targets, its support for ISIS and other jihadists, and its neoliberal harshness is justifiable and essential.

Anti-Semitism in the West is a shadow of its pre-WW II level. Jews are safe from persecution, not endangered.

Except for street gang and related violence, Blacks, Latinos, other people of color, Muslims, and adherents of other non-Judeo-Christian religions in America and other Western countries have much to fear – most often victims of violence, not its perpetrators.